This report relies on primary data collected during outreach activities mostly. This data
was later on entered, collated in an MIS and analysed. The data was collected by
individuals who were trained on child protection and research ethics.

Streets of Peshawar – a mapping of street child

This mapping of Peshawar was conducted to understand the level of visibility of groups and/or populations of children on streets. Issues related to their visibility are being dealt with the conceptual clarity that NWFP as a province, and Peshawar as a large city as well as the capital of NWFP, may or may not have similar trappings for children living or spending most of their time on streets who are visible in any other large city or provincial capital of other provinces in Pakistan. Another factor that is being examined in this mapping is the situation of children who are being displaced along with their families or are leaving on their own because of a war-like situation in some parts of NWFP. 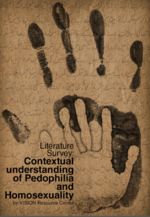 Contextual Understanding of Pedophilia and Homosexuality

The aim of this study is to understand and measure the Knowledge, Attitude and Practices of society regarding child labor, trafficking and related laws. In other words, the intent is to understand and measure the knowledge of general public about the laws that forbids child labor and trafficking, the knowledge concerning all the possible physical and mental conditions that the child endures while being involved in labor. In addition to this, the objective is also to assess the attitude as well as actual practices of general public towards child labor and trafficking, based on their knowledge of the laws and its impacts on children and overall society.

It is considered to be a societal norm that the most sustainable and effective intervention that can rescue a child from a sexually abusive or sexually exploitative situation should come from the adult who has the best interest of the child at the very core of his/her thought process, that generally being the parents or blood relatives of the child. However, what is becoming evident is that due to rising poverty levels resulting in the neglect of the child, the core values of care giving and/or care taking of the children is getting redefined. This report, and the core study, analysis the environment of the child living or working on the street, especially in the context of sexuality.